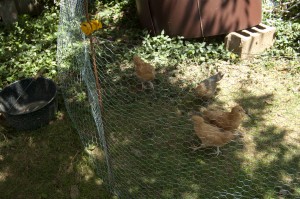 (I would’ve posted last night BUT had to make a fence/ playground for our peeps (baby chicks).  They were feeling a bit, uh, cooped up.)

This is a classic exuberant 1880’s mid-Victorian Eastlake  rocking chair.  Design wise, it was not a subdued age, but don’t confuse that with poor quality.  This chair was made of solid hard maple throughout.  Not just any maple, but obviously carefully selected quilted/tiger stripe/birds eye maple for the back uprights.  Beautiful.  The “gingerbread” — extra spool turnings here, there, all over — weren’t just for show, but tended to strengthen the chair.  It was made to use, and last, a long time.  And it did, already now well into its 2nd century.

Apparently it’s been in the same family since bought new.  The owner speaks of family members going back several generations who owned it.  Now it’s his turn, and he wants to get it ready to pass on to the next generations.  That’s what we’re all about.

He spoke of its sitting close to a wood cook stove for a long time.  Then it served about 60 years as a painted porch rocker.  He recalls a photograph of his Dad sitting in it on that porch, holding him as a newborn.  He remembers liking the chair, including its two-tiered arms.  Also something about his mother’s frustration with its loose upper-tier arms, then watching in disbelief as she ‘fixed’ them by sawing them off, spindles and all.  Voila, no more loose arms, and a cleaner, more modern look!  (Quite the thing in the ’50’s).

But her son never forgot, and when he inherited the chair, he purposed to see it restored.

This is the story of that restoration.